A very interesting feature of the bot is the random playback of sentences. This is where certain sentences entered in the chat text source are automatically reordered by the bot to form more sentences. How do you set the bot to create new sentences and what can you do with this feature? Find out in this tutorial series.
Prior Knowledge:
It is worth watching the Bot Tutorial: Set up chatter beforehand.

The "Play sentences randomly" function is enabled when the key for it is set to green. 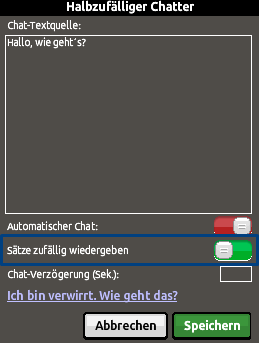 In addition, the sentences must follow certain patterns. In two or more sentences, two words per sentence must appear written one after the other. These two words must also appear in the other sentences.

The sun is very beautiful and gives us warmth.
Jupiter is very big and looks like a bright star. 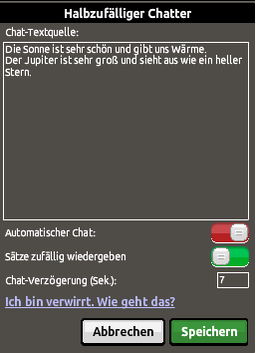 Example:
The sun is very beautiful and gives us warmth.
Jupiter is very large and looks like a bright star.

New sets will look like this:
The sun is very large and looks like a bright star.
Jupiter is very beautiful and gives us warmth.


Only the blue areas can be exchanged with the green areas. Blue and blue or green and green can never be combined with each other.

Example (which will not happen):
The sun is very Jupiter
large and looks like a bright star is very beautiful and gives us warmth.

Fortunately, the bot is smart enough to avoid such sentence combinations. The following gif shows what this looks like:​

In the 2nd part of this tutorial series, advanced methods will be shown to use this feature even more effectively.​