With the Chatter you can set if, what and how the bot speaks. In this tutorial you will learn what the Chatter can do and how to set it up.

Set up chatter
In order for a bot to be able to speak something, predefined sentences have to be saved. To do this, click on the bot and then on "Set up chatter" as shown in the gif. The Chatter window opens, and in the chat text source you can save the sentences you want the bot to speak. Individual independent sentences can be separated with the return/enter key ↵. 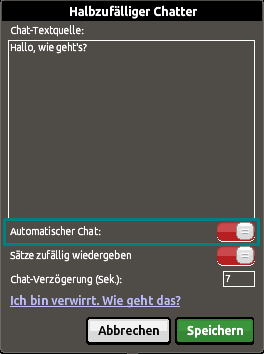 Automatic Chat
​Automatic chat: If it is enabled (green button), then every x seconds the bot will randomly speak one of the saved sentences you entered in the text source. If it is disabled (red button), the bot will only speak when a habbo has said something. The bot will then respond with a random sentence after a few seconds. 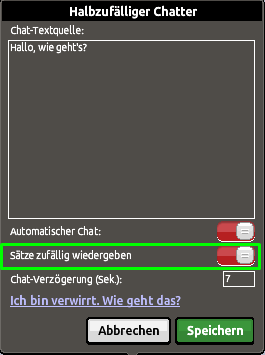 Sentences are rearranged
​Sentences that contain two words (see red marked words in the example) and directly follow each other are recognized by the bot if the combination reappears in several sentences. That is, when the pattern repeats, as shown in the example. More about this function can be found here. 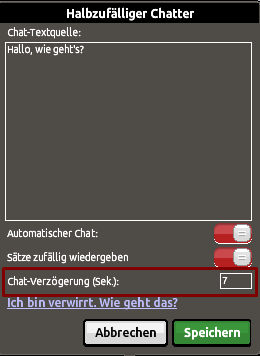 Chat delay (sec.)
Chat delay (sec.): Only if the automatic chat is activated, the chat delay plays a role. A number can be entered inside the box. At least 7 sec. Attention: The delays are not absolutely equal, so this cannot be used as a kind of time measurement or similar.
Work around bugs:
It can always happen that the bot does not do what it should and bugs occur. In this case, it is recommended to place the bot in the room again. Sometimes it also helps to save again or simply try both. And if the bot often swallows the 1st word, then it can be because the sentences are not directly under each other. The sentences should not have any space between them (see pictures below).