New and improved method for calculating the last user in a game. The "Last Man" settings were always relatively bug-prone until now. Due to a simultaneity problem, which sometimes executed effects twice, incorrect calculations occurred. Thus, light balls were moved twice or colour tiles were switched twice. To prevent this, the path of the light balls is shortened so that they can only move one field at a time. 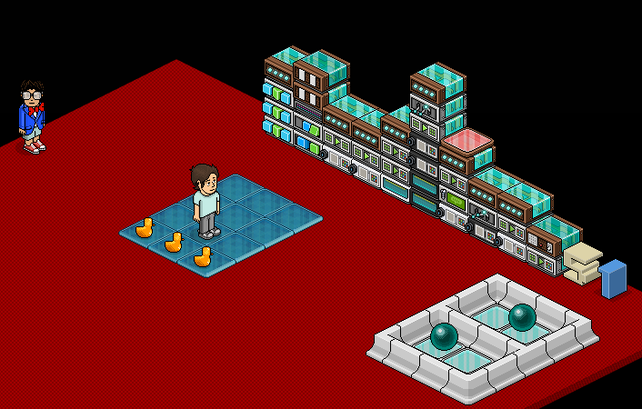 Complete setup of a "Last Man" system
​The principle is very spectacular. If there are 2 or more users in the playing field, the light balls move parallel to each other. However, if only one is left, the movement of the light balls changes almost in a flash, after the 2nd user has disappeared, then continues asynchronously. The number of diagonal positions is counted. If a significant number comes together, this is detected as the "last user". However, errors can still occur. Unforeseen influences that can occur after an uncertain time would bring the light balls into the wrong positions, which would then still be counted. Therefore, a time limit of 2 seconds each is set.

Each time the counter adds a number, the next number must be added within 2 seconds or, in other words, if the diagonal positions occur too infrequently, the counter is reset and counting starts again. Nevertheless, this method is very fast. The recognition of a user takes only 2.5 seconds. It would not be doubtful that this duration could even be surpassed. However, according to current research, this would degrade accuracy and precision.

The Last Man System could create new possibilities for fully automatic games that have been less or only difficult to realise up to now. Well-known games like DTTF or Don't Get Caught can be optimised with it. In addition, wired costs are saved, because in this system something does not have to be set up for every 1 by 1 floor space.
​

Last Man System in use

Change direction instead of attack: Collision must be created by the change direction effect. The attack effect depends on where a user is standing. If, for example, 2 users are standing diagonally next to each other, a freeze floor must decide which user it should collide with. In certain places, it can unfortunately happen that a user does not collide. To avoid this, a "collision direction" is defined for each floor.

Simultaneous collision: If 2 users collide at the same time, in a normal collision stack only one user would trigger from both. But if collision is built into the stack 2 times, both users are recorded almost simultaneously. But a Wired effect alone can normally only be triggered once per 0.5 seconds, so two effects are built in and the Extra Wired "unused effect". The Extra Wired ensures that each trigger can trigger a free (unused) effect and thus this enables 2 effects to be triggered simultaneously in the event of a simultaneous collision. Of course, simultaneous does not mean absolute simultaneity, but things that happen in a time range of less than 0.5 seconds.

Double protection: In the GIF above, double protection is built into the setting. Actually, this would work fine with one protection alone, but past experience has shown how bug-prone Last Man settings can sometimes be, so an additional protection was installed. Various tests were carried out: 1st protection only, 2nd protection only and both protections together. In no case could a false detection be detected. It is only important that at least one of the two is in. The fuse refers to the white no. block being set to 0 if an error would occur.