Blob
General:
In some events there are games where bots have to be controlled. With a control pad made of arrow plates, usually only a piece of furniture is controlled at first, which is hardly visible. The bot is then set to follow this furniture.
Setting:
In all "Move And Rotate Furni" wireds the blob is selected. One (different) direction is selected per Move and Rotate Wired.​

Each move and turn Wired is responsible for one direction
​Setting aid:
The blob can be found with the command :furni. Or you can turn on the countdown timer and pause it, then the blob can be treated like other furniture. If the timer has expired or is out of the room, the blob deactivates itself again.

Select blob using the timer
The control pad is built up with the arrow plates as follows:

In the walks on wireds, a different plate is selected each time.

If one steps on a certain arrow plate, the blob should move in the direction in which the plate points. For this purpose, the walks on wireds are set to move and turn wireds. But in such a way that the arrow direction of the plate coincides with the set arrow direction.

The directions of the plates must match the direction set in the Wired
Now the blob can be controlled:

The blob is controlled
The Wired "Bot move to Furni" ensures that the bot follows the blob. In the Wired you select the blob and write the bot name (case sensitive!). 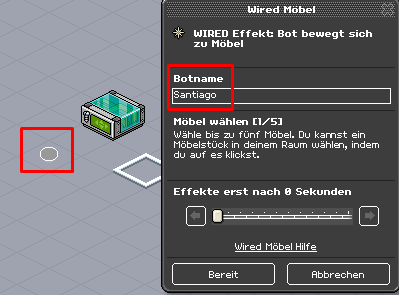 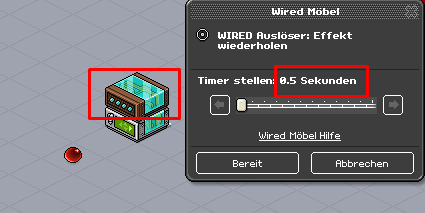 If a countdown timer is used in the game and you still want to have the blob deactivated, you can change this with the Wired "Toggle Furni State". You can use "Game starts" as a trigger, the effect time should then be 0.5 sec, otherwise it is too early.

With this wired stack you can deactivate the blob
If you have HC, you can also use the green blobs, which do not activate directly when the timer starts (only switch with furniture states while the timer is running). This saves the setting from above. However, it can be laborious to work with :furni, especially if there is a lot of furniture in the room. A better alternative is the "Flying Lantern" furniture. After using it, it performs an animation, after which only the shadow is left (can be undone by using it again). In this state, the furniture can be selected, moved, etc. normally.