Questions from the community

How can a soccer ball/puck be slowed down or stopped, for example, so that the ball stays in the goal long enough to be registered by the Wireds?
Question from: different users
​A soccer ball or a puck (ice hockey puck move further, for example) often react similarly. Every now and then you find that they can be slowed down or even moved a little further by height differences. Height differences can be created e.g. by stackable floors with a certain height. It depends on which places and how high stacking is done (at badly chosen places it can even happen that nothing changes). In addition, it also makes a difference how many height differences there are and whether it is ascending or descending. The following GIFs should show how exactly this is meant:

When the different setups are combined, there are even more possibilities. But in the end it depends on the position from where the user shoots, which is why there is more deceleration or acceleration than stopping (to stop with height differences see below). A stronger method of stopping pucks and balls directly, regardless of the position from which they are shot, is shown below:

Pucks and balls are teleported when shot at a banzai trap. However, if you put a piece of furniture on/in all traps except a trap on which nothing can be stacked (e.g. duck) and shoot the puck at the free trap, it will stop without "teleporting".

Ball stops by banzai blocking
It also works when a bot or user is on the other trap.

For soccer games, balls have to be stopped or slowed down a lot, because they are often moving too fast for the wireds. In such games the Banzai blockade can work, but then the goal has to be blocked off to a 1 x 1 field. Depending on the design, you would not wave if someone scores a goal or would not get a goal point. A better option is to have banzai traps behind the goal. This way you also get a goal point and the goal itself is not restricted. There are different construction possibilities for this. However, you have to build everything in such a way that, if possible, the player does not find a shooting angle that can ensure that the Wireds do not "notice" the ball. A setup whose function is very safe and well tested looks like this: 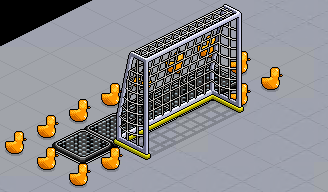 Instead of ducks, you can use other furniture that can block the ball. It is also possible to replace the "banzai trap field" with very deep floors, but this requires BC. Otherwise it is possible (e.g. by stacking field) to set the goal and the field higher.

It would be important to know that after a goal shot, if the ball should return to the center, the wireds should best trigger repeatedly, because the ball, while in motion, cannot be positioned/moved somewhere else via wired (other effects work then, of course). It will trigger and be detected by the Wireds if the movement is slow enough, but moving furniture, especially pucks and balls, is basically bad to position somewhere else.

As you can see, pure wired knowledge is not always important for setting up games. Sometimes knowledge about mechanics is needed (mechanics furniture: roller, pucks, rails, horse jump, one way gate...).