1 x WIRED Condition: Has Furni On

1 x WIRED Condition Negative: Has NO Furni On
​​Möbel:

1 x Glowball
General:
Camp or AFK protection (not to be confused with Anti-AFK!) is used to kick users who intentionally or accidentally block a path for a longer time, e.g. by stopping on one spot. Therefore it is often called "block protection". To prevent blocking, the wireds must be set to kick all users who block the path for a certain time.
Setting:
In principle, an AFK protection consists of three parts (the respective definition for the following words are to be considered exclusively in connection with the AFK protection):

1. timer: the timer determines how long a user may stand on the protected area before being teleported.
2nd Kick: The user indirectly triggers his own teleport.
3. reset: the timer restarts when a (or the same) user comes onto the protected area.
Structure:
​
​The pure setting (explanation comes later):

The 1st Wired stack makes the glowball move once per second, but only when a Habbo is on the protected area. The movement stops as soon as the glowball is on the ring plate.

1. wired stack moves glowball to ring plate when user on protected area
Repeat effect is set up to 1 s.​ 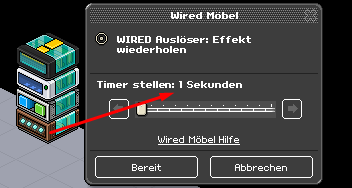 Move And Rotate Furni fixes the glowball. Under "Move furni": the arrow direction leading to the ring plate is selected. Rotation and effect time remain unaffected.​ 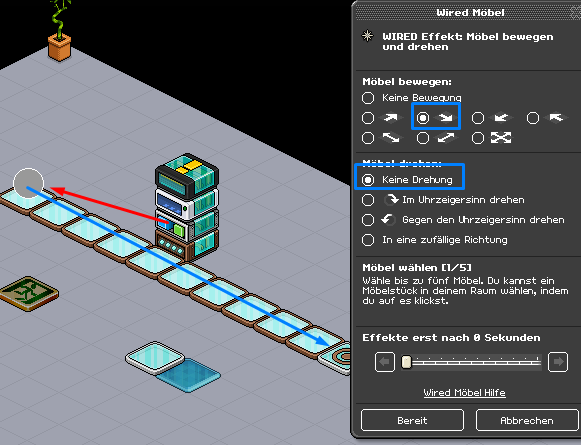 ​
Furni has avatars condition fixes the pressure plate, which is the protected area.​ 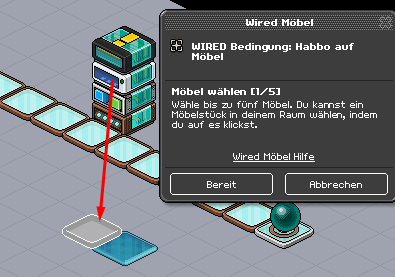 ​The negative condition "Has NO Furni On" fixes the ring plate. The blue marked point in the picture below (left) shows which point has to be selected (in this case it doesn't matter which point you choose).​ 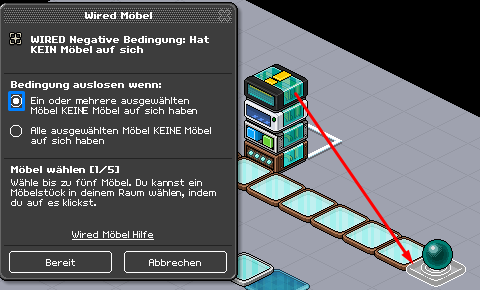 ​​
The 2nd Wired stack teleports the user, who collides with the Freeze tile. For this, the user must stand on the pressure plate. Only when there is furni (= glowball) on the ring plate, then the teleport is active.

Collision trigger is automatically active and does not have to be set up. 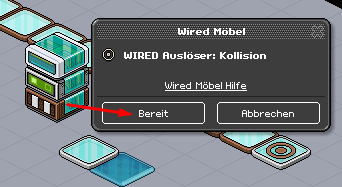 The Teleport-Wired fixes the exit tile with 0 s effect time. 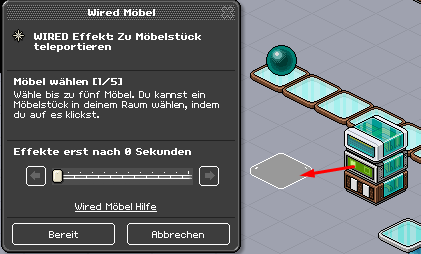 Has Furni on condition fixed ring plate. Upper point (marked in blue) is selected, but it can be the lower point in our setting. 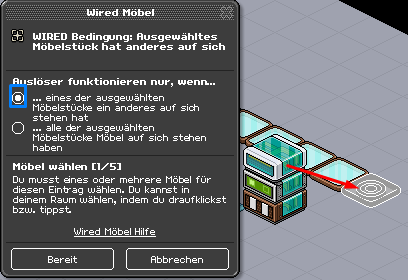 ​
The 3rd wired stack causes a collision with the user standing on the pressure plate and the freeze tile. The collision is caused every 0.5 s. 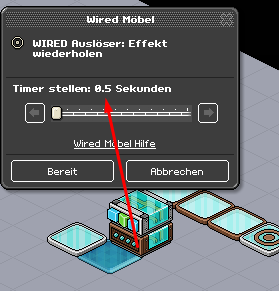 Change direction Wired fixes freeze tile (effect time 0 s). At the top, the arrow direction pointing to the pressure plate is selected. Below, "Wait" is clicked. 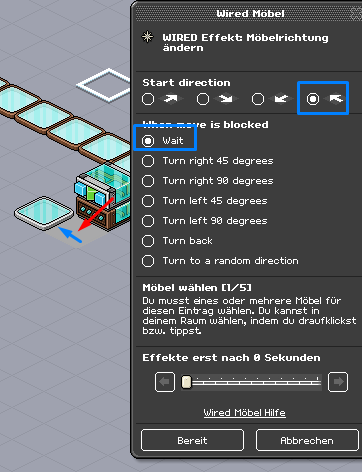 ​
The 4th Wired stack repositions the glowball to the 1st tile when someone steps on the pressure plate. 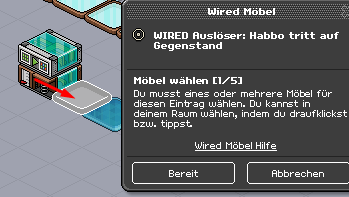 ​The position wired fixes the glowball on the 1st tile (glowball must be there when saving!). The 3rd hook is set as shown in the following picture (blue). Effect time remains at 0 s. 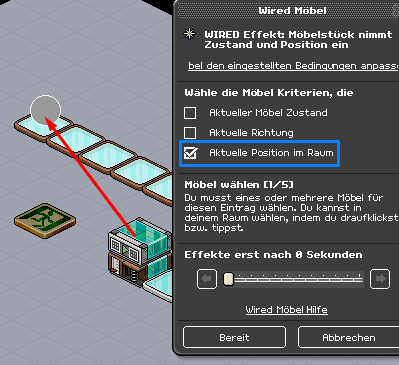 The glowball represents the timer. It is needed to set the time from when a user should be kicked. Repeat effect should be set as low as possible (0.5/1 s), otherwise the time fluctuates and is not always the same (see "Did you know?"). Finally, the time is defined by how long the glowball takes to reach the ring plate. If you want to set a different time, you only need to move the ring plate further away/closer to it without having to change anything on the Wired. The color tiles are not really needed, they only show the way.

The freeze tile was chosen because it would not slip if Change Direction Wired were to move it constantly. It is held like this, so "wait" is also selected in Change Direction for safety. Since the user would just stand around while blocking, no trigger can detect this. Therefore the user is forced to do this by colliding unnoticed with the freeze tile. The user touches the freeze tile and the trigger collision recognizes this contact and which Habbo it was. With this, the trigger will perform the teleport effect.

Why should repeat effect fluctuate at higher time setting, when this in itself includes a very reliable timer?

The variation does not refer to the trigger itself, because it is really very accurate. The problem is, if Repeat Effect triggers the first time, as soon as the glowball is on the 1st tile (i.e. at the start), then it is a coincidence at which time the trigger is already located. Because the trigger does not simply stop. It gets out of rhythm.

The lower the time, the fewer fluctuations exist. Assuming you would set 10 s and there would be only 3 tiles (2 movements), you would assume 20 s. But in reality the timer can be wrong by 10 s (50%!). With 2 movements it always stays at 50 % (maximum). This means the longer the path, the lower the variation. Therefore you often combine both to get the time as accurate as possible. Shorter trigger time, but a longer path.

But did you know that repeat effect can be reset? See the following GIF:

Timer Reset can reset repeat effect
So with timer reset, you can completely bypass fluctuations - if you set it correctly. Why then was the Wired not used? It is because this Wired would reset every effect without exception, programmed time and some Wireds more. Without this Wired (timer reset), you can use the method shown here in all rooms and not have to worry about wireds being reset by mistake.