In this part you will learn how to use several two-word combinations in different sentences or even in one sentence. We'll use "because I" as the 1st combo and "because you" as the 2nd.

Sentences:
​I have many thalers because I am thrifty.
I had beautiful furniture because I receive many gifts.

We're on the road because you showed us a shortcut.
We're stuck here because you didn't know what to do.

The purpose of these sentences is to show that the bot also allows multiple combos without them affecting each other. 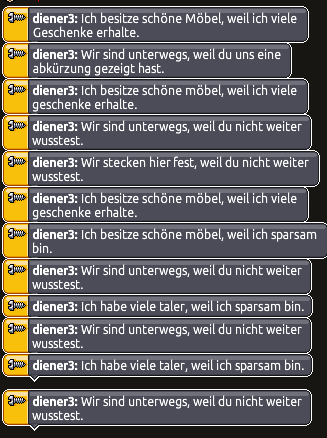 However, it becomes more interesting when there are several combos in a set.

Sentences:
​The dentist sits on the chair and treats the patient while he sleeps.
The clown sits on the balloon and amuses the audience while he laughs.
The musician sits on the piano and plays to his friend while he sings. 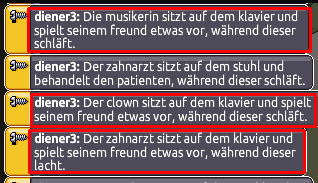 This then makes sentences possible such as: ​The dentist sits on the balloon and amuses the audience, while he sings.

Since the bot can randomly assemble these sentences, it is possible to exploit this feature for wireds to trigger random effects. As an example, let's use a code that keeps changing. A three-digit number from 000 to 999. The text source must contain the following: 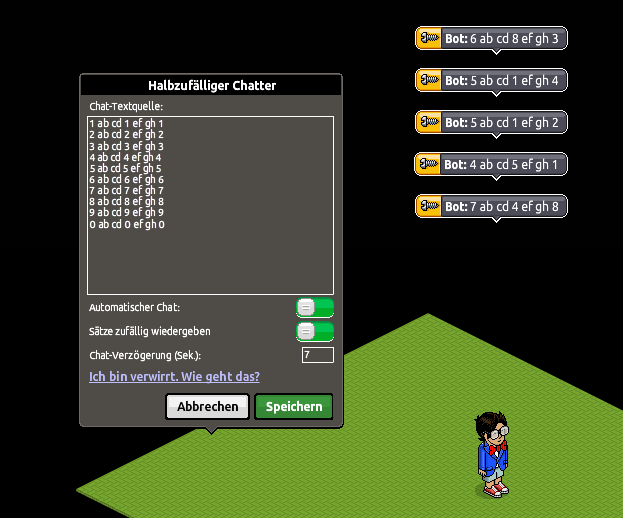 Triggering User Is On Furni: Selected is the floor where only the bot may stand.

Match Furni to Position & State:
There the numbers 0 to 9 are stored by the number building block. The 1st stack row refers to the hundreds digit, the 2nd to the tens digit, and the 3rd to the units digit. (That's 10 stacks per stack row, with 3 stack rows that makes a total of 30 stacks).

User Says Keyword:
For the hundreds digit, the 1st number is copied from the source and the associated word combination so that the Says Something Wired can distinguish which number digit it is. The 1st row is then copied from
1 down to 0 down, so that each Sagt-etwas Wired contains a different number (see picture).​

The final result will look like this (bot message is then invisible due to user-says wireds):

This method is relatively economical, considering that it would also have taken 1000 wireds to store and then recall every possible number.